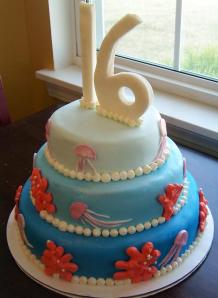 I recently got a request for a Sweet 16 cake, but not just any Sweet 16 cake….one with Jelly fish on it. I wasn’t completely sure how I was going to pull off fondant jelly fish, but I think what confused me most of all was why a girl would want them all over her cake. I have to admit it though, after seeing her vision in cake form, I understand why she wanted this. It ended being quite pretty, and she couldn’t have been more happy with the finished result.

I covered each layer of the cake in blue fondant, which gradually became darker to give it the super popular trend right now of an ombre effect. As for the jelly fish, they were much easier to make than I had originally thought.  First I cut out random strips of white fondant that were approximately an inch long, and placed them in groups on the cake. Then I cut out small circles, and cut the bottoms to made the jelly fish head. After glueing them on the cake, I painted the jellies with a pink luster dust & water mixture, which resulted in a blurry yet shimmery effect. The orange coral is royal icing that I piped onto wax paper, and after it dried, I attached them in random spots along the 2 bottom tiers. I cut out a giant ’16’ from white fondant, and covered them in silver luster dust, because every Sweet 16 cake needs a little bling, and then I finished the bottoms of each tier with Italian buttercream ‘pearls’. Since I had left over brown sugar & graham cracker ‘sand’ from the Mermaid Dora cake, I brought some along when I delivered this cake in case she wanted some around it on display for the party.

On the menu for this Sugar Shindig: a 3-tier Vanilla cake with Cream Cheese frosting filling, covered in Vanilla Italian Buttercream and Marshmallow fondant.

When I'm asked to make a special cake or treat for an occassion, I feel truly honored, because to be apart of special events in people's lives is kind of a big deal for me. I put my heart & soul into everything I make, using only fresh ingredients, and looking for creative ways to make that particular treat extra unique and memorable.

If there is something you had in mind for an upcoming event, please feel free to contact me. Thank you!